The stock market ebbed and flowed throughout July, ending on a positive note.  Inflation continued to dominate the economic news throughout the month. Not only did the CPI advance more than expected, but the personal consumption expenditures index (a preferred inflation indicator of the Federal Reserve) hit a 40-year high. The real estate sector continued to slow in July after setting a torrid pace in 2021 and early in 2022. However, the labor market showed strength, adding nearly 400,000 new jobs, while wages have increased more than 5.0% over the past 12 months. After raising the federal funds rate late in the month, Federal Reserve Chair Jerome Powell hinted that the pace of interest-rate hikes may eventually slow to assess the cumulative impact on the economy. Gross domestic product decelerated for the second straight quarter, for the three-month period ended in June. Industrial production also slowed in June, with manufacturing output falling for the second consecutive month.

Crude oil prices declined for the second consecutive month in July, something that hasn't happened since 2020. Rising inflation has cut into consumer spending, weakening demand. Crude oil prices advanced over 10.0% to nearly $115.00 per barrel. Gas prices also continued to fall in July after reaching record highs in May and June. The national average retail price for regular gasoline was $4.330 per gallon on July 25th, down from $4.872 on June 27th but $1.194 over a year ago.

Overall, stocks enjoyed the strongest month since 2020. The S&P 500 had its best month since November 2020, while the Nasdaq's monthly performance was the best since April 2020. Investors saw strong corporate earnings reports as a positive sign for stocks, an indication that the economy may have some strength in it. Consumer discretionary, technology, and industrials led the market sectors. Ten-year Treasury yields ended the month down 33 basis points. Gold prices decreased nearly $30.00. The U.S. dollar road the ebbs and flows of the stock market and bond prices, ultimately ending the month higher than it started. 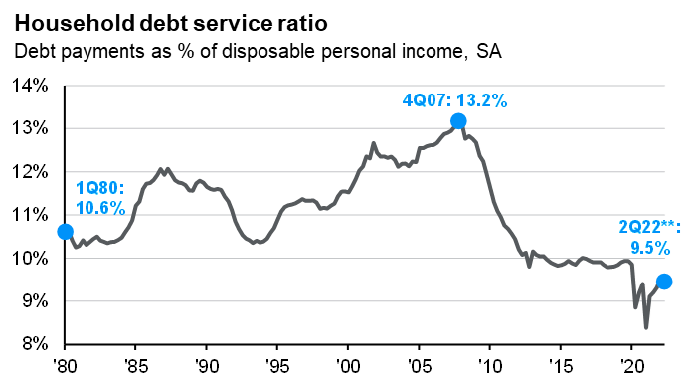 Eye on the Month Ahead

In August, investors will be looking for some clues as to the state of the economy, particularly in the aftermath of the Federal Reserve's interest-rate hikes (the FOMC does not meet in August). The employment sector has shown some evidence of slowing, with a downturn in new hires and an increase in unemployment claims. The housing sector has also retreated from its torrid pace set earlier in the year. Nevertheless, economic indicators haven't shown an obvious curtailment in the pace of inflation.

The information and opinions in this report were prepared by the ANB Financial Services Division of ANB Bank. Information and opinions have been obtained or derived from sources we consider reliable, but we cannot guarantee their accuracy or completeness. Opinions represent ANB Financial Services opinion as of the date of this article and are for general information purposes only. ANB Financial Services does not undertake to advise you of any change in its opinions or the information contained in this article. Past performance does not indicate future results. The value or income associated may fluctuate. There is always potential for loss, as well as gain. Trust and Investment Services are not insured by the FDIC, Not a deposit or other obligation of, or guaranteed by, the depository institution subject to investment risks, including possible loss of the principal amount invested.

ANB Bank is not responsible for nor has control over the content of any linked site. The inclusion of a link does not imply or constitute an endorsement by ANB Bank, its ownership or management, the products or services it offers, or any advertisers or sponsors appearing on the linked site.